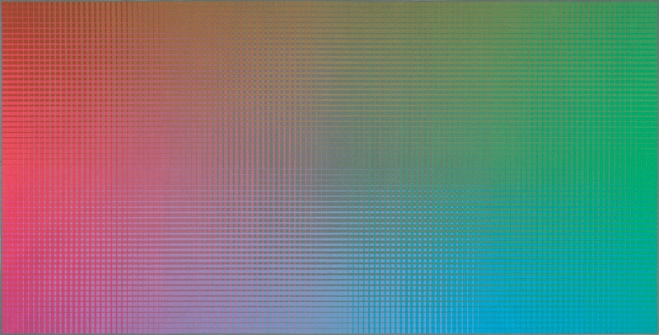 Sanford Wurmfeld is quite simply one of the most informed and articulate painters working with color today. It is not only a matter of what he knows and says, but of the chromatic clarity of his large-scale optical paintings. One of the most important, yet understated aspects of his unforgettable series of perennial grid-based patterns, currently on view at Hunter College Times Square Gallery, is their complex integration of primary and secondary hues and values. (Wurmfeld taught at Hunter from 1967 until his retirement in 2006, from 1978 as chair of the art department.) What Wurmfeld reveals is a sequential modulation of color that ultimately staggers the eye/brain mechanism­and let’s include the emotional charge as well. With color theories informed by such luminaries as Leo Hurvich, Josef Albers, and Dorothea Jameson, Wurmfeld has evolved his own profoundly investigative manner of working as one of our leading geometric abstract painters. His indefatigable visual articulation of color and light derives from a process of sheer focus and assiduity that inform numerous magnificently executed, large-scale paintings in this first-rate exhibition. Missing are the full-scale circular dioramas that embrace the viewer with a saturation of color on all sides. Three major installations of these have been executed and shown elsewhere, but they have yet to be seen in New York.  ROBERT C. MORGAN