The Day of the Dead in Mixquic is a very rich cultural tradition, full of color and folklore that shows a series of beautiful offerings along with other activities such as theatre, music, expositions, dance, and food.
Mixquic is a region that was declared World Heritage by UNESCO. Its origins date back to approximately 670 A.D., it was greatly influenced by diverse cultures such as the Culhuacan, Chalco, Cuitlahuac, Xochimilco, Azcapotzalco and Tenochtitlan lordships, which fought for it since it was a great vegetable producer and it was surrounded by the Chalco Lake. Later, they suffered the Spaniard evangelization by the religious order of the Augustinian friars who added the denominative “San Andres” and built several religious temples.
The name Mixquic is composed by the Nahuatl etymology “mizquitl”, which is related to the mesquite and the postposition “C” which is translated as “in the”; altogether they convey the meaning “in the mesquite” or “place of mesquites”; however; it has been suggested that its actual translation comes from the Nahuatl word “miquiztli” which means death.
The Day of the Dead festivities in this region begins on October 31st with the placing of a table for the offering with food and allegories related to this tradition. On the 1st of November, at noon, 12 bell strokes announce the arrival of the children’s souls; the people fill the paths with white flowers’ petals, light a candle and offer them a prayer. On November 2nd a bell stroke announces the departure of the children’s souls and the arrival of the souls of the adults. Later, at 7 o’clock in the evening, an event called the “alumbrada” (“lighting”) takes place in the cemetery, where the tombs are decorated with flowers and candles in order to pay homage to the dead and show them the way. Finally, on November 3rd, neighbors exchange fruits, bread, and food to mark the end of this beautiful tradition. 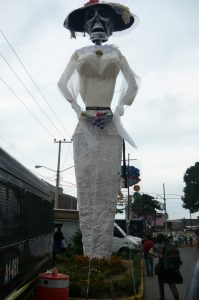 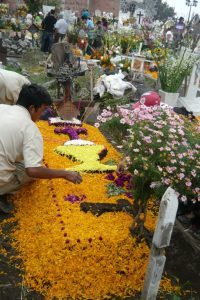